The concept of a hospital as a place for sick people to get better has a very long history. But it was not until modern times that the hospital actually fulfilled this important role. Until medical science understood the importance of bacteria and viruses and the methods which they use to infect people, the hospital was usually a place where people went to die. But with the advent of better medical technology, better medicines, pain relievers, anesthetics, and sterilization procedures the hospital began to assume the role which we know today. 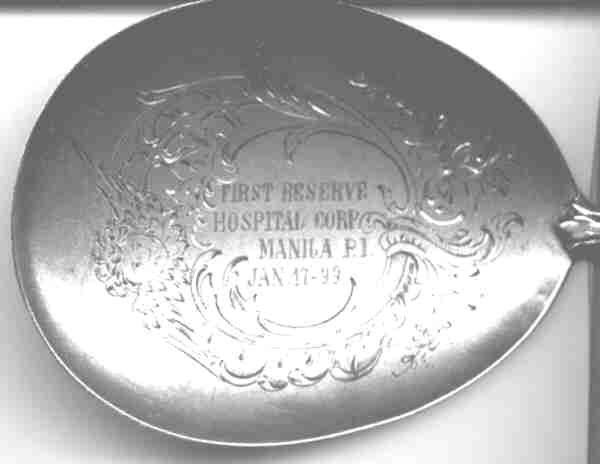 From the Spanish-American War occupation of the Philippines

This spoon has been moved to its own exhibit --click here 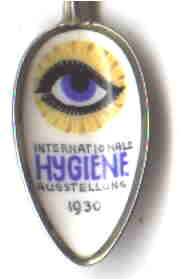 We also find a few spoons engraved with pictures of the new hospital. Most of the buildings were very important to the residents and large or small they demanded that a silver spoon be engraved to commemorate their importance to the community. 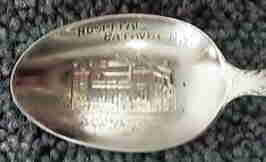 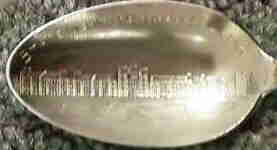 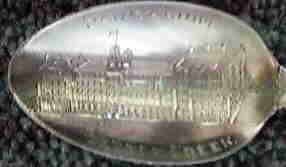 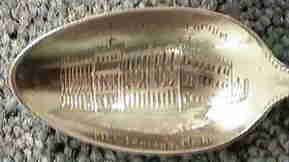 The director of the Battle Creek Sanitarium was a Dr. Kellogg. One of his passions was that people should eat natural foods, grains, nuts etc. (yuck). He actively developed a regimen that many still follow today including a number of tasty breakfast foods. One of his frequent visitors was a man named Post. Post asked for some of the recipes and these were given to him free. He packaged them as cereals and business prospered. Dr. Kellogg then saw the business possibilities of his recipes and started marketing them himself. (I'll bet that I don't have to tell you what firm he founded). At one point Battle Creek, Michigan had over 100 firms producing breakfast cereals and was the world leader in this business category.

so this was obviously a centennial celebration

silver plated spoon for the Canada National  Institute  for the Blind