Technically silver slices are NOT spoons, but they are similar enough that I felt justified in having an exhibit related to them. Actually the spoon end if it were flattened out would be a slice.

Three of these pieces are fish slices and I am unsure of the use of the fourth.

This very large and very heavy slice has a nice engraved picture of a fish swimming in swirling waters.
The handle is art nuevo, but it is not a prime example of that style.
The back has a mark of 800 which tells us it is continental grade silver and MD which I have not yet figured out.
There is also a mark with two 'S', one forward and one backward in a 'bush' cartouche. 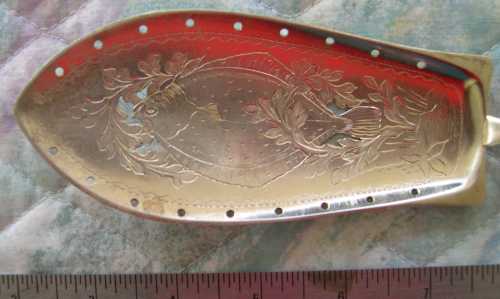 This is a very large and very sophisticated looking fish slice which features an engraved 'fat' fish swimming in plants and water.
There are hand cutout holes around the engraved fish for fluid drainage and there are drilled holes along the borders. This slice also features 'ears' at the back.
It has a two tower Copenhagen assay mark for 1939 to present and a maker mark of JCA which refers to J.C. Andersen of Copenhagen (1907-1967) and the word "eneret" which is like our word "patent".

This is a smaller very interesting engraved slice (unsure of purpose).
It features a lot of art nuevo engraving and a twisty stem.
It is marked with 5 small cartouches with undefined characters, but in the British style.
I suspect that it was made in one of the British colonies.

This small fish slice depicts a fish decorated with chasing and engraving swimming in tranquil waters.
The heavy handle is in the 'old English' style.
It is marked "Hermann" , a triangular cartouche with AS above an I, and a round cartouche with a rampant lion.
I have no idea as to where it came from or its age.
It does appear to be silver and appears to be handmade.